I haven't disappeared.  I've been diligently working on the FoW Tournament app over the last 2 months.  Working with Joe Krone to get it the way Battlefront wants it.  Unfortunately this also means I've done ZERO painting.

Its getting close to being done.  The biggest challenge without getting too technical was getting drop downs to individually filter in a grid and being able to write it back to the database without a big performance hit.  This is so things could be edited on the fly, sorta speak.  I wanted to be able to edit the tournament with out opening up umpteen new windows.  In my research on how to do this, it sounds like I'm not the only one who has trouble with combo boxes (as they are really called) in a datagrid.  Not with out buying some crazy 3rd party tool anyway.  No one seemed to be able to build a data grid, and filter individual combo boxes based on other combo boxes and then save it back to the database.

Since "some" of the Saskatoon guys already think I'm too cocky there is no sense holding back now.  So I'll say it, "I'm an F'n genius."  I finally figured it out.  I'm now 100% happy the direction this project is taking.

Anyway, here's where its at.
Mission Generator is 100% working and updated to Version 3 missions.  Check the missions you want and it will randomly generate one for you.  This is a standalone tool, but will be incorporated into the tournament.

Just added buttons to check or uncheck all missions of a group. 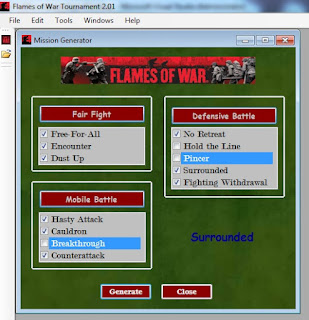 Add players to your database.  I've been working on adding Provinces/States of countries around the world.  Provinces will be filtered based on the country that you select.  You will also put your RHQ rank and # in here.  you can always come back here to edit existing players or add new ones.  this does not add them to your tournaments. 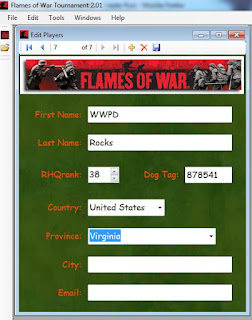 You can load tournaments in progress.  You can (theoretically) run multiply tournaments at the same time.  Haven't tested the database hit yet.  Just click button with the tournament name you want. 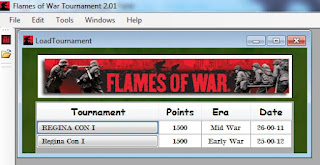 It will Auto Generate matchups for you and randomly assign the pair to a table.  You can view different rounds by selecting the round you want from the drop down.  Once populated you can edit the dropdowns to manually set tables and matchups.  Soon I will be adding random missions, and if it detects 2 Fortified armies will automatically assign that pair to the No Man's Land mission.

Also has a timer for strickly keeping track of a round.  The timer will turn red when it gets to 30 minutes let.  I've thought about also having it do some kind of sound like machine gun fire or something.

Go to set up to change the rules of your tournament.  Still working on what battlefront wants here.  and how it will look. 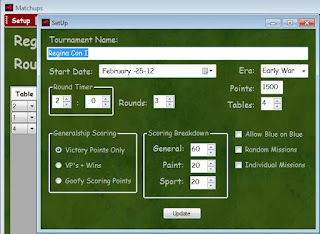 Set your rosters.  This screen is the main reason why I wanted to get these dropdowns in data grids working.

A HUGE Thank you to Gregg Sitter from EasyArmy for providing me with army lists.

You can select a source a country and an alignment and it will filter your list of armies to choose from.  I will also have it filter by era of the tournament that is running.  I think there is a lot of potential for EasyArmy and this app to talk to each other in the future.  Could even validate your lists from EasyArmy to make sure the era and points total match.

I am also working on Steve's  idea of drag and drop for adding players to your tournament.  But for now it will just be checkboxes.  Clicking add players will give you the list of all players in your database. check their box to add them to the current tournament.

And as above it has a mission generator for your tournament.  you can choose random missions or assign them yourself.  Either way you will only be able to select the ones you checkbox. 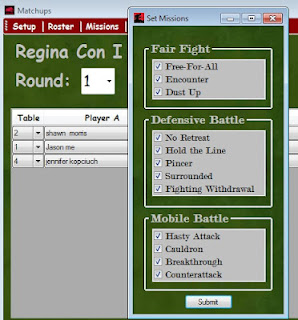 So, I'm getting there.  I applogize to my millions and millions of fans (or 1) for being away so long.  But I really am working hard on this.  I haven't disappeared.  I really want to get going on my Kampfengrupe Bake Kompanie.


Rules Nazi Note
I am ABSOLUTELY loving Version 3.  I don't know about everyone else.  To the point where I can't even stand to look at the old Version 2 book.  But the Rules Nazi will be back.  I've already found a couple of...issues.  Maybe they've been resolved already on the forum but we'll see.

Hope to talk to everyone soon.  My goal is to have this app completely working (minus a few options) and ready for test before the end of March.